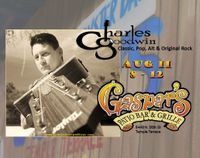 Charles DEBUT's at Gaspar's Patio Bar & Grill. This is a Temple Terrace mainstay for live music and good food and Charles is really looking forward to it. A guaranteed good time. See you there! 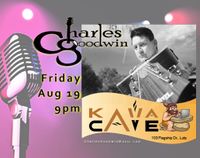 DEBUT SHOW! This is a fun place with a cool chill vibe. Not your average Friday night hang out. Check them out https://www.facebook.com/kavacave22 Then come check me out there! 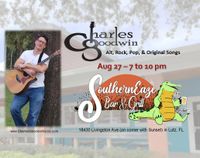 Come see my high-energy acoustic show at SouthernEaze while enjoying delicious southern cooking & hospitality. They have table and bar seating, both indoor and outdoor with plenty of adult beverages and AMAZING food. Can't wait to see you there. 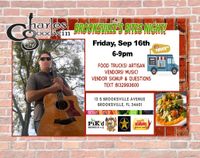 Join me for a fun night of artisanal vendors, food trucks galore, and music by yours truly! I'll post more details as I have them. 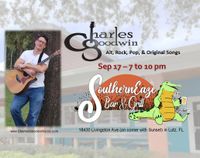 Delicious southern cooking & hospitality and a range of live acoustic music. Table and bar seating, indoor and outdoor, with plenty of adult beverages and AMAZING food. Can't wait to see you there!

Available for Private and Public Performances.
To book, call or email
813-358-8038
info@CharlesGoodwinMusic.com

Charles Goodwin is an alt-rock/folk-rock singer-songwriter who weaves introspective lyrics into a style which is personal and unique, yet instantly familiar.

After leaving his childhood in New Orleans behind, Charles lived and performed in diverse locations around the globe. He was front man for the Qatar-based Richard Cranium Band which was regularly invited to perform at USO clubs, and also awarded a primetime slot at the 2008 Dunestock Festival. Charles is now a solo artist making waves in the Tampa Bay area.

Charles Goodwin's stunning debut solo album "Gaslight Baby" is now available. This LP was recorded during the height of the 2020 COVID-19 pandemic. The highly accredited producer Nick Coetzee helped develop Charles's music into an impressive and cohesive collection of songs that dig deep into the soul and flow easily between the darkness, light, pain, love, and joy of the human experience.

Charles recently released music videos for "Gilded Wings" and a live performance of "We Used To Be" with four more videos soon to drop. Additionally, Charles Goodwin has been writing new songs and will be back in the studio before the end year.